THE YEAR OF LIVING DANGEROUSLY (Australia 1982)— From director Peter Weir comes a work with realism so jarring that it stands apart from other war films.  Linda Hunt won a best supporting actress award for her part as Billy, the resourceful assistant to a reporter covering Indonesia’s civil unrest in the 1960s played Guy Hamilton (Mel Gibson in a breakout role.) A non-fiction Guy Hamilton as handsome as Gibson was the American reporter in Southeast Asia, Jerry A. Rose.

THE UGLY AMERICAN (1963 Universal-Int’l) — In this fictional film based on a popular novel, Marlon Brando plays the conflicted US ambassador to a country resembling Vietnam.  Brando comments about growing addicted to risk and in an outstanding performance actor Eiji Okada says inescapable poverty is “water from the moon.” https://www.imdb.com/title/tt0056632/?ref_=nv_sr_srsg_2

THE JOURNALIST: The real life Southeast Asia “adrenalin junkie” immune to risks was reporter Jerry Rose, who is profiled by Minnesota writer Lucy Rose Fischer in the book “THE JOURNALIST: Life and loss in America’s Secret War.”  Rose was reporting on the Vietnamese corruption and the ineptness of American diplomats and military brass in the early 1960s when the public and news media gatekeepers weren’t interested in Vietnam. By the time they got interested, their husbands, brothers and sons were coming home in body bags. https://www.mnvietnam.org/story/a-sleeping-child/

SUNSET SONG and BENEDICTION —- “Poetic realism by Britain’s greatest living auteur,” according to the DVD notes about British director Terence Davies.   In Davies films characters exist out of the mainstream order living lives of quiet desperation.

Davies films are understated with minimal music scores while the landscapes create poetic moments.  More about Davies in this attached interview:

CRY TERROR with Roy Neal at the Burbank Airport

CRY TERROR (1958) — A suburban family is held hostage in their home by a crazy man (Rod Steiger) and his drug-addled accomplice (Neville Brand).  There’s a bit of me in this story.  The crazy intruder was a popular film genre in the 50s.  Brand has a great scene when he explains his addiction to the hostage wife (Inger Stevens) who is memorable running along railroad tracks in a subway tunnel.  Likewise, the hostage husband (James Mason) appears quite anxious hanging onto a cable in an elevator shaft.  Whatever keeps you on the edge of your seat, you’ll find in “Cry Terror.”

For me I enjoyed cameos with NBC news reporters  Chet Huntley, network news anchor, and Roy Neal who covered aeronautics for NBC TV News when I was an editorial assistant at KNBC in 63-64.  Neal, who fancied a cigarette holder, was a bit stuffy but likable.  (Rockets, missiles, satellites and space travel were big news in the 60s).  I picked Roy up in my ’61 Plymouth Fury at the Burbank airport when he returned from an assignment.  The Fury had some space age touches with an aluminum fin running the length of the trunk and very Buck Rogers illusions, mostly dismissed by car buyers and industry critics.  As reporter Jim McLaughlin of The Idaho Statesman observed, it looked like it was going 30 miles an hour when it was sitting at the curb.  I now happily drive a Dodge Dart, a brand that found currency in SoCal with a “little old lady from Pasadena the terror of Colorado Blvd.”  https://www.imdb.com/title/tt0051501/?ref_=nv_sr_srsg_0

JOHNNY GUITAR & CATTLE QUEEN OF MONTANA (1954) — Forget damsels in distress because ladies on horseback rule in these big budget westerns.   Middle aged ”golden era” actresses Joan Crawford and Barbara Stanwyck play powerful cowgirls who literally call the shots.  Execs at Republic and RKO studios were staring into the abyss in the burgeoning TV era when they released these two dusty dramas.  Crawford as the saloon owner does a strip and is aggressive in her feud with Emma (Mercedes McCambridge) while Sterling Hayden as Johnny takes a back seat to Crawford’s theatrics.  Stanwyck is quite feminine in a romantic scene with incidental fading cowboy star Ronald  Reagan in “Queen” while giving bad boy land grabbers a taste of their own medicine.  Both were filmed in color in the Mountain West’s scenic locations and the soundtrack music in “Queen” is exceptional for a horse opera.  “Johnny Guitar” is cited in the NYT book as one of 1,000 essential movies to see.

RAIN (1932) — In a pre-code United Artists film, a married missionary Alfred Davidson (Walter Huston) is presumably making a tyrannical soul-saving attempt driven by lust in a sleazy hotel on behalf of prostitute Sadie Thompson (Joan Crawford).  Davidson’s obsession soon becomes apparent in this south seas tropical drama.  In short, “men are men” Sadie quips for what transpires between her and the soul-saving traveler.  The pounding rain combined with an  incessant disorienting jungle drumbeat heighten the sexual tension as Davidson shivers and shakes in the shadows.  I didn’t fully understand this steamy cinema as a teen when I first saw it on an afternoon matinee in 1954 on KXLY-TV.  It’s from a W. Somerset Maugham short story that was originally filmed with Jean Eagles and remade in the 1950s with Rita Hayworth.

TOP GUN MAVERICK (2022) — Old is new again and Tom Cruise, who would be eligible for AARP membership, has been resurrected 36 years after the original Top Gun for a wild blue yonder thriller.  I was less than thrilled.  Junior bird men and bird women duel it out in the sky against missiles to knock out the threatening installation of an unnamed country (I assume Canada).   Leonard Maltin wrote that Anthony Edwards was the reason to see the original, but his character was knocked off in the ’86 Top Gun.   Most Navy officers after 36 years have retired to a trailer park near San Diego, but not Cruise who is cast in yet another golden oldie, a Mission Impossible sequel.  The recycling of scripts won’t stop —at the Riverview a Jurassic Park sequel is next month’s feature.

“It could have been a 1942  film with Cary Grant and Randolph Scott,” said Rick Notch. 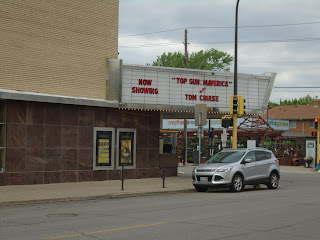 Howard Hughes made his mark with aerial warfare in the 1930 “Hells Angels” and tried again in 1950 with “Jet Pilot” but it was shelved until 1957 when RKO was gone and moviegoers weren’t interested in dueling pilots from cold war countries.

A few blocks form the river in a residential neighborhood is the Riverview Theater, a 50s mid century modern design with an oval shaped auditorium.  Very "modern" copper drinking fountain and furniture.

THE PLAYER — It was marketed as a ‘thriller” but it’s a subversive dark comedy where an unpleasant Hollywood studio executive murders a screenwriter but then who cares?  Overkill with cameos of celebrities.  Buck Henry is featured as a writer trying to sell the exec (Tim  Robbins) on a sequel to “The Graduate” which seems like a terrible idea.  Whoopi Goldberg plays the cop leading a dysfunctional investigation of the murder where a “reliable witness” identifies another cop (Lyle Lovett) as the perp.  Not to be missed. https://www.imdb.com/title/tt0105151/?ref_=nv_sr_srsg_0

SCARLET STREET (1945- Universal) — This is the drug of choice for film noir addicts.  Fritz Lang’s classic film noir is a biblical tale of lust in the garden of evil where the prostitute Kitty (Joan Bennett) dangles her ripe fruits under the twitching nose of the lonely artist/cashier Chris (Edward G. Robinson) who takes a bite.  Aided by her pimp played by a regular visitor to the dark side, Dan Duryea, they take the hapless Chris for all he has or can steal.  Kitty reveals her cheapness and vulgarity in the restaurant scene with Chris where a straw carelessly dangles from her lips while she nervously talks.  A contrived conversation amongst strangers on a train offers an opinion that Chris will have to pay a steep price for the wages of sin. https://www.imdb.com/title/tt0038057/?ref_=nv_sr_srsg_0

THE HOODLUM (1951 Eagle Lion Classics) — Actor Lawrence Tierney was the reigning king of the bad boy genre and he hasn’t mellowed in this low budget film noir directed by Max Nossock (Dillinger).  After laying waste to his family, his dying mother denounces him thusly:  “What can momma do; go to the electric chair for you.  I was blind.  I always stuck up for you.  I should have let you rot in jail.  Your brothers’ girl friend died with your unborn baby in her.  You are the smell.  You are the stink.” https://www.imdb.com/title/tt0043655/?ref_=nv_sr_srsg_1

BENEDICTION (UK 2022) — A very sobering look at life in Great Britain during World War I, including discrimination against gays and staggering loss of lives.  Showing now at the Main theater on the river in historic St. Anthony Main with the Prime Timers.  Cobble streets are quaint but the Dodge Dart didn’t appreciate the ride.

SWISS MISS (1938 MGM Roach) — Laurel & Hardy are moving yet another piano in this musical but this time it’s over the alps on a flimsy rope bridge with a menacing ape.  Not the best L&H but some great musical numbers including the flag throwing extravaganza and a sound stage full of dancers in town square.  In a droll British moment Eric Blore and Walter Woolf King sing “I Can’t Get Over the Alps,” which infers that the “miss” in Swiss is secondary to the mountains if you hadn’t guessed.  (Blore has some very amusing moments with Edward Everett Horton as a fussy butler in the 1930s Fred & Ginger RKO musicals.)  In July 1963 on a steaming hot LA day before air conditioners were standard in cars I was at the Roach Studios with John Miller of Ontario and his girl friend for the auction of props from L&H films, most of which went to the museum.  A sweet women on a camp stool shared L&H memories from her photo album when her husband Charles Rogers was music director at this Culver City studio — a sad movie land moment.

DAMN  YANKEES (1958) — Weary from the Washington Senators losing ways, a middle aged fan sells his soul to the devil (Ray Walston) and is transformed into youthful Joe Hardy (Tab Hunter), an MLB all star.  Bases are loaded with tempting Lola (Gwen Verdon), the devil’s femme fatale who chirps it’s “your heart and soul I came for.”

Meanwhile the Senators find that “you’ve got to have heart” to win games.   Hunter writes in his autobiography that the studio thought Verdon “wasn’t pretty enough” and they wanted to replace her with Marilyn Monroe or Mitzi Gaynor although she had won a Tony for Damn Yankees.

In the cable TV series “Fosse Verdon,” Michelle Williams and Sam Rockwell are outstanding in their creative partnership that resulted in Yankees and more.  https://www.imdb.com/title/tt0051516/?ref_=nv_sr_srsg_0

Posted by Dave Zarkin at 8:45 AM No comments:

FLASH GORDON (1980 UK) — It’s a cult classic.  The writer of the script for this turkey (in an interview on the DVD)  candidly admits that the film is “campy and confusing.”  The Italian producer Dino De Laurentiis was only interested in making a “Star Wars” like film.  Screen writer Lorenzo Semple Jr. said De Laurentiis could neither read or speak English so he didn’t bother with the script which is a series of unrelated confrontations with evil forces.  Semple didn’t understand Italian so they worked through a translator who only spoke French.  The script could have benefited from criticism but that never happened, said Semple.

I was a teen when the entertaining 1936 Flash Gordon serial with Buster Crabbe was shown on KXLY-TV at 3 pm weekdays so I hustled home from school to see the latest installment.  The movie is based on a 1930s comic strip.   In the 1980 version, credible actors were recruited for supportive roles — Max von Sydow as Ming and Timothy Dalton as Prince Barin, but the lead is an unknown, Sam J. Jones.  Would Laurence Olivier as Flash have made a difference? https://www.imdb.com/title/tt0080745/?ref_=nv_sr_srsg_0

Dave Zarkin
I am a retired veteran of state government and news reporting interested in movies and politics.